The Los Carneros AVA is almost always shortened to Carneros for simplicity. It lies on the Napa-Sonoma border. However, it comes as a surprise to some that the majority of this wine-growing area is located in Sonoma County. It’s for this reason that many producers also sell wines under the Sonoma Valley AVA. It is located adjacent to San Pablo Bay and has historically been most associated with high-caliber Pinot Noir and Chardonnay. In addition, a substantial quantity of grapes grown in this AVA are destined for sparkling wine production.

Carneros covers approximately 90 square miles in total. Vineyards in the Mayacamas hills vary in elevation from sea level to around 400 feet at their highest. Los Carneros vineyards are subject to the distinctive Bay Area climate with its characteristic fog and cool winds. Temperatures here tend to be more consistent than further north. All of this means that Carneros is both the coolest and most breezy AVA in Napa.

Peak summer temperatures tend to peak in the 70s (Fahrenheit). Weather conditions are often chilly with a substantial breeze ushered in from San Pablo Bay. Rainfall typically sits in the 20-25 inches range annually. The highest terrain is around 650 feet above sea level but the great majority of vineyards sit between sea level and 400 feet.

Carneros soils are shallow and low in vigor. They are composed mostly of clay but you’ll find a greater influence of loam moving northwards through the AVA. Hardy subsoils thwart the deeper rooting of vines and limit yields. Producers here tend to emphasize ripeness and battle a cool and breezy climate in pursuit of excellent fruit. 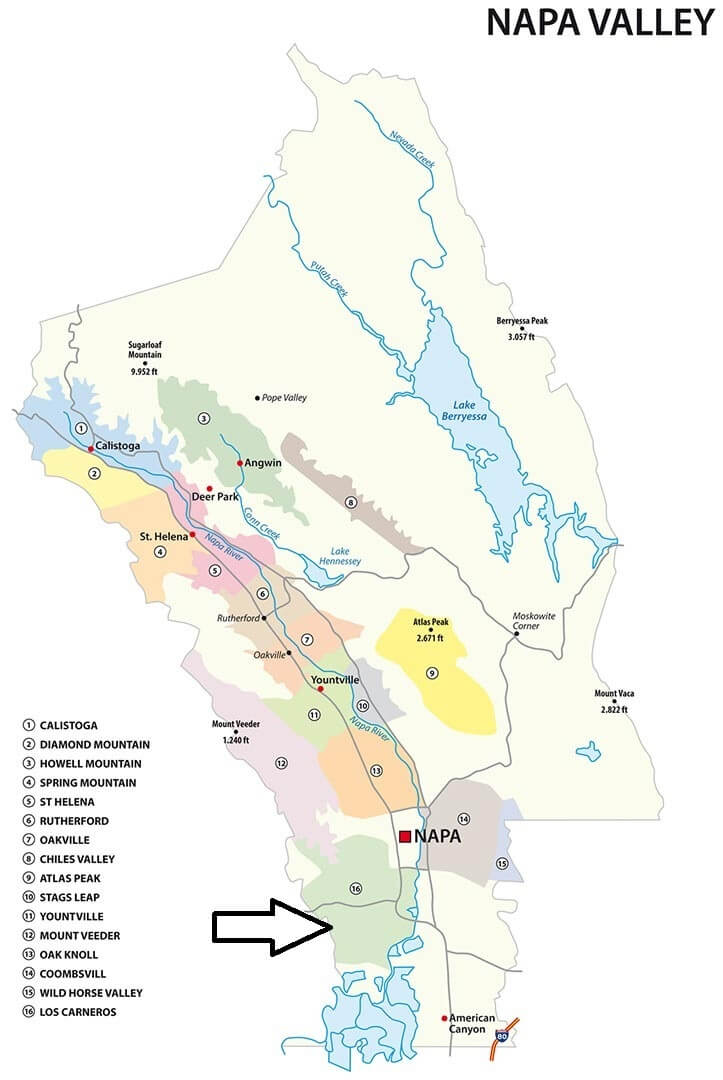 Carneros is well-known for its svelte clay soils and their relative inability to achieve proper drainage. Producers struggle with the low fertility of these soils and the consequent effects on their vines. These challenging conditions, coupled with strong winds from the Bay, limit the vines ability to absorb water. Indeed, root systems are typically shallow and weather conditions push harvests toward the late side. This is a result of slow and labored ripening.

The best Carneros vintages emerge from long growing seasons that give fruit the opportunity to develop at its own pace in tough but relatively consistent conditions. For this reason, it’s perhaps not surprising that varietals like Pinot Noir and Chardonnay do best here, thanks to their ability to thrive in cooler surroundings.

Among the most significant developments in the history of this AVA was the 1942 purchase by Louis Martini of the Stanly Ranch. He undertook a substantial effort to uproot and replant vines best suited to the unique climatic conditions. In effect, Martini raised the bar and drew attention to the area with a number of higher quality vintages.

Stanly Ranch helped prove the feasibility of Carneros as a wine-growing region and attracted more growers to the region. In something of a virtuous cycle, the output of the region consistently improved in quality. Another winemaker, Francis Mahoney, further pushed the envelope in collaborating with scientists from UC Davis to achieve even more attractive Pinot Noir.

By the 1980s, the reputation of Carneros was burgeoning not only within California but across the world. More established producers moved in and bought up land to cultivate fruit primarily destined for sparkling wines. Among these were Domaine Chandon and Gloria Ferrer.

Later that decade, phylloxera was to strike and served to thwart some of the excitement building around the region. It forced many producers to replant their vineyards with phylloxera-resistant rootstock. It also served as an opportunity for growers to dabble in a newer generation of excellent French vines. When the Chardonnay boom reached full momentum, Carneros saw an explosion of new planting running to thousands of acres.

Tourists are now attracted not only by the wines of Los Carneros but also by the thriving food scene of Napa.

What to Look For 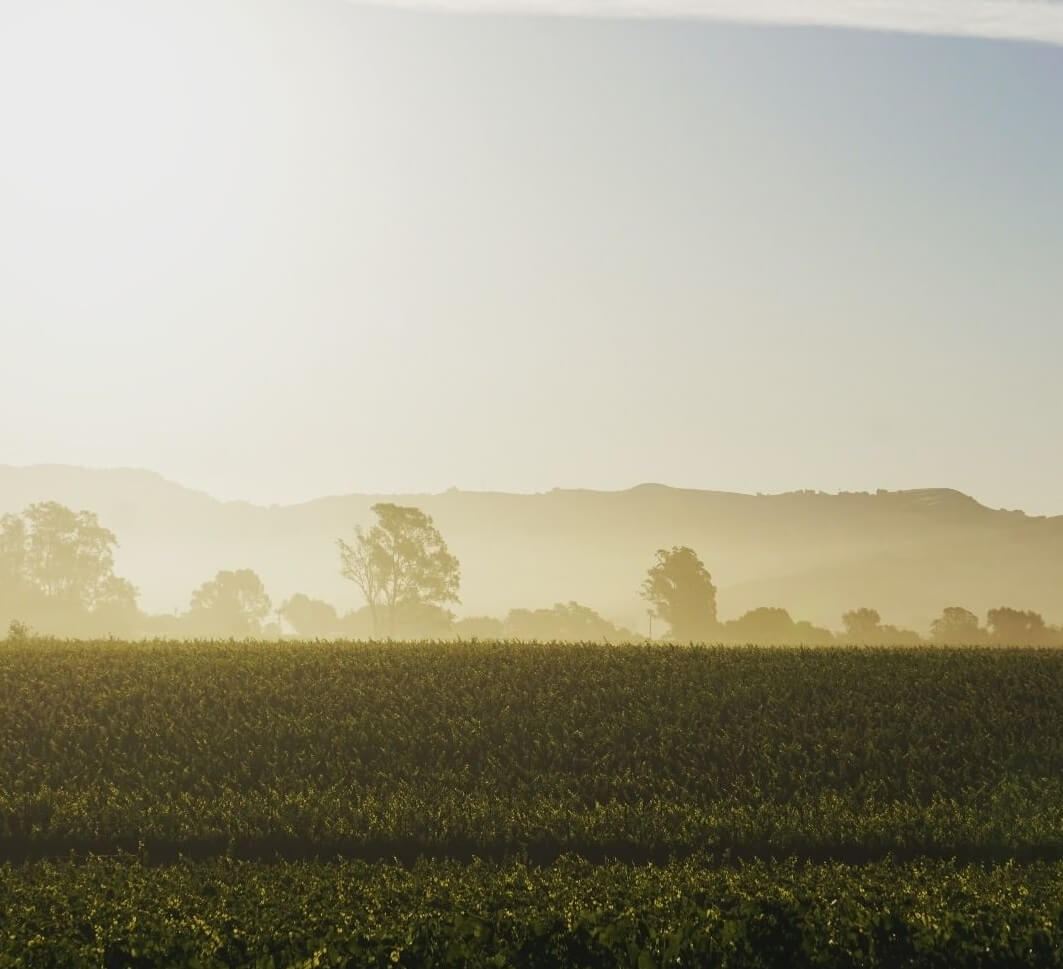 Note that not all wineries serving wines of the Carneros AVA are physically situated within the region. In addition, many larger producers serve wines from a multitude of other growing regions.

Carneros’ climate is an intriguing blend of characteristics from the quintessential Mediterranean climate and the harsher continental climate. There is just enough warmth for the grapes to ripen and they typically do so slowly. The area is full of experienced producers who’ve learned from past mistakes and refined their methods to near perfection.

There is something uniquely special about the Chardonnays of California. This perhaps stems from the fact that few places on earth offer a climate with such a narrow band of seasonal variation and a finely struck balance between cool and warm. Producers typically struggle the most during especially chilly years.

Ripeness is a critical concern for growers and requires keen attention to detail. Breezy conditions throw another spanner into the works. Mold and mildew typically thrive in Carneros’ characteristically fog-ridden mornings. Nevertheless, challenging conditions often produce some of the finest wines.

The Chardonnay of Carneros has a particularly special and noteworthy ripeness. The aroma can even turn citrusy at times. Another thing to pay attention to is the acidity of the wine, which lays the foundation for tremendous depth and flavor. Parceled together, these characteristics make for an indulgent and delightful tasting experience.

Carneros’ climate, while cool by Napa standards, remains considerably warmer than in France’s most significant Pinot Noir and Chardonnay growing regions. While summer temperatures in Burgundy are roughly on par with Carneros, French growers face substantially cooler winters. The somewhat warmer conditions of Carneros add depth and character to its finest wines.

Note that not all wineries are physically located in the Carneros AVA region. In addition, many larger producers serve wines from a multitude of different growing regions.

Timothy has a wealth of experience across a multitude of wine-related disciplines. He holds a bachelor's degree in winemaking and oenology.

He cut his teeth as a viticulture consultant in the lush and fertile vineyards of the Rhône valley. Later, Timothy occupied head sommelier positions across a number of distinguished restaurants in both England and continental Europe.

Although not a permanent Napa resident, Timothy visits the region annually and is never too far away from the wine industry, whether as a critic, journalist, or consultant. 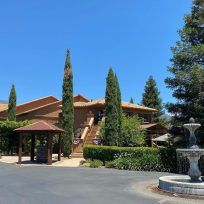 An Inside Tour of Bennett Lane Winery, Calistoga 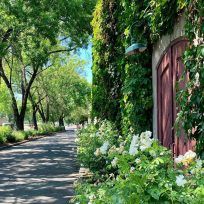 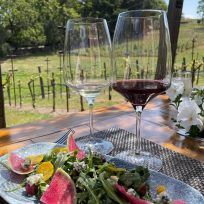 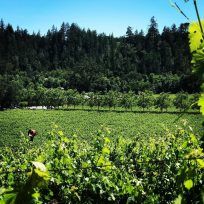 Timothy has a wealth of experience across a multitude of wine-related disciplines. He holds a bachelor's degree in winemaking and oenology. He...

Timothy has a wealth of experience across a multitude of wine-related disciplines. He holds a bachelor's degree in winemaking and oenology. He cut...